Foods to Avoid When Pregnant

Eating well-balanced meals is important at all times, but it is even more so when you are pregnant. There are essential nutrients, vitamins, and minerals that your developing baby needs. Most foods are safe; however, there are certain foods to avoid when pregnant.

Foods to Avoid While Pregnant 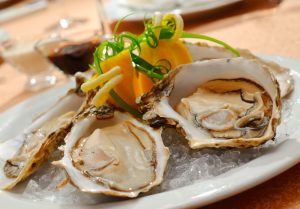 Raw Meat: Uncooked seafood and rare or undercooked beef or poultry should be avoided during pregnancy because of the risk of contamination with coliform bacteria, toxoplasmosis, and salmonella. At home, the temperature should reach at least 145 F for whole cuts, 160 F for ground meats like hamburger, and 165 F for chicken breasts.

Deli Meat: Deli meats have been known to be contaminated with listeria, which can cause miscarriage. Listeria has the ability to cross the placenta and may infect the baby, which could lead to infection or blood poisoning and may be life-threatening. If you are pregnant and you are considering eating deli meats, make certain that you reheat the meat until it is steaming.

Fish with Mercury: Fish that contain high levels of mercury should be avoided. Mercury consumed during pregnancy has been linked to developmental delays and brain damage. A sample of these types of fish includes shark, swordfish, king mackerel, and tilefish. Canned, chunk light tuna generally has a lower amount of mercury than other tuna, but still should only be eaten in moderation. The American Pregnancy Association recommends Safe Catch Tuna 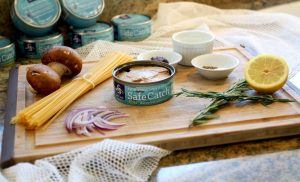 because their testing technology ensures each can of tuna is as pure as wild salmon or wild sardines.

Certain types of fish used in sushi should also be avoided due to high levels of mercury. Please see Mercury in Fish for specific types of fish and further information on how to calculate mercury levels.

Smoked Seafood –Refrigerated, smoked seafood often labeled as lox, nova style, kippered, or jerky should be avoided because it could be contaminated with listeria. (These are safe to eat when they are in an ingredient in a meal that has been cooked, like a casserole.) This type of fish is often found in the deli section of your grocery store. Canned or shelf-safe smoked seafood is usually fine to eat.

Fish Exposed to Industrial Pollutants: Avoid fish from contaminated lakes and rivers that may be exposed to high levels of polychlorinated biphenyls. This is primarily for those who fish in local lakes and streams. These fish include bluefish, striped bass, salmon, pike, trout, and walleye. Contact the local health department or the Environmental Protection Agency to determine which fish are safe to eat in your area. Remember, this is regarding fish caught in local waters and not fish from your local grocery store.

Raw Shellfish: The majority of seafood-borne illness is caused by undercooked shellfish, which include oysters, clams, and mussels. Cooking helps prevent some types of infection, but it does not prevent the algae-related infections that are associated with red tides. Raw shellfish pose a concern for everybody, and they should be avoided altogether during pregnancy.

Raw Eggs: Raw eggs or any foods that contain raw eggs should be avoided because of the potential exposure to salmonella. Some homemade Caesar dressings, mayonnaise, homemade ice cream or custards, and Hollandaise sauces may be made with raw eggs. If the recipe is cooked at some point, this will reduce the exposure to salmonella. Commercially manufactured ice cream, dressings, and eggnog is made with pasteurized eggs and do not increase the risk of salmonella. Sorry, but you should probably resist the raw cookie dough too if it contains raw eggs.

Restaurants should be using pasteurized eggs in any recipe that is made with raw eggs, such as Hollandaise sauce or dressings.

Soft Cheeses: Imported soft cheeses may contain listeria bacteria.  It’s best to avoid soft cheeses such as Brie, Camembert, Roquefort, Feta, Gorgonzola, and Mexican style cheeses that include Queso Blanco and Queso Fresco unless they clearly state that they are made from pasteurized milk. All soft non-imported cheeses made with pasteurized milk are safe to eat.

Pate: Refrigerated pate or meat spreads should be avoided because they may contain the bacteria listeria. Canned pate or shelf-safe meat spreads can be eaten.

Fresh-squeezed Juice: Pregnant women should opt for juice that is pasteurized. Fresh-squeezed juice in restaurants, juice bars, or farm stands may not be pasteurized to protect against harmful bacteria, including salmonella and E. coli. Some markets also sell raw, unpasteurized juice in the refrigerated case — look for the required warning label, and steer clear.  Juice in boxes and bottles on your supermarket shelf is also safe.

Caffeine: Although most studies show that caffeine intake in moderation is permissible, there are others that show that caffeine intake may be related to miscarriages. Avoid caffeine during the first trimester to reduce the likelihood of a miscarriage. As a general rule, caffeine should be limited to fewer than 200 mg per day during pregnancy. That’s one 12-ounce cup of coffee. Caffeine is a diuretic, which means it helps eliminate fluids from the body. Don’t forget, your favorite soda, chocolate or energy drink probably contains caffiene.

This can result in water and calcium loss. It is important that you are drinking plenty of water, juice, and milk rather than caffeinated beverages. Some research shows that large amounts of caffeine are associated with miscarriage, premature birth, low birth weight, and withdrawal symptoms in infants. The safest thing is to refrain from consuming caffeine.

Alcohol: There is NO amount of alcohol that is known to be safe during pregnancy, and therefore alcohol should be avoided during pregnancy. Prenatal exposure to alcohol can interfere with the healthy development of the baby. Depending on the amount, timing, and pattern of use, alcohol consumption during pregnancy can lead to Fetal Alcohol Syndrome or other developmental disorders.

Unwashed Vegetables: Vegetables are safe, and a necessary part of a balanced diet. However, it is essential to make sure they are washed to avoid potential exposure to toxoplasmosis. Toxoplasmosis may contaminate the soil where the vegetables were grown.

Raw Sprouts: Don’t eat any raw sprouts, including alfalfa, clover, and radish. Bacteria can get into the seeds before the sprouts begin to grow, and these germs are nearly impossible to wash away. At the deli, check sandwiches to make sure they don’t contain raw sprouts. At home, cook sprouts thoroughly to destroy any bacteria.

Get the myFetal Life App for Apple and Android endorsed by the American Pregnancy Association.  It features meal recommendations, kicks counter, blood glucose tracking, and more.

3. Eating for Two: The Complete Guide to Nutrition During Pregnancy Abbott-Hess, Mary, et al, Ch. 4, 5 and 7.