Ovulation is when a mature egg is released from the ovary, travels through the fallopian tube, and is ready to meet sperm and be fertilized. Approximately every month an egg matures within one of your ovaries. The lining of the uterus is thickened to prepare for the fertilized egg. If no conception occurs, the uterine lining, will shed during your period. Fairhaven Health is a corporate sponsor and they provide effective and affordable ovulation prediction tools.

What are the Signs of Ovulation?

Can You Ovulate More Than Once During a Cycle?

A woman should not ovulate more than once during each cycle. This is due to a careful balance of hormones and their levels – it takes just the right timing and release of hormones to bring on the release of a mature egg. Therefore, she cannot get pregnant more than once during a cycle. Remember, if you are not using a tracking method such as OPKs, basal body temperature, or cervical mucus, there is no guaranteed way to pin down the day you are ovulating. Many period tracking apps will give you your “day of ovulation,” but this is only an estimation of when it might happen. Thus, two days (or more) after the predicted ovulation day may not be a “safe” day to have sex to avoid pregnancy, since it’s possible that you have not actually ovulated yet.

Multiple ovulation is another phenomenon that can occur and is when two or more eggs are released in a single cycle. The eggs are released during one 24 hour period and are responsible for the birth of fraternal twins. It is believed that this may occur in as many as 5-10% of all cycles but does not result in that many twins due to a type of miscarriage referred to as the “vanishing twin phenomenon.”

When Do You Ovulate After Your Period?

A woman’s monthly cycle is measured from the first day of her menstrual period until the first day of her next period. On average, a woman’s cycle is between 28-32 days, although some women may have much shorter or longer cycles.
Most women ovulate anywhere between Day 11 – Day 21 of their cycle, counting from the first day of their last period. This is your “fertile time” and when  sexual intercourse has the best chance of producing pregnancy. Ovulation can occur at any point during this window and may occur on a different day each month.

A combination of methods such as observing your cervical fluid, taking your basal body temperature daily, and tracking your periods can help you identify your time of ovulation. Try our ovulation calendar to get you started. A Fertility Kit or Monitor from our sponsor Fairhaven Health is a great way to pin point your fertile days.

When are You Most Fertile?

During ovulation, an egg is only available to be fertilized for about 12-24 hours. But sperm can live in the body for 3-5 days after sex and the egg is available for one day, so your most fertile time is about 5-7 days.

Don’t You Ovulate on the 14th Day After Your Period?

This is a myth that many, including healthcare professionals, still believe. The “14th-day” thinking appears to come from either taking the average of when all women ovulate or from just dividing the 28-day cycle in half. This is not an accurate way to calculate ovulation because many women do NOT ovulate on the 14th day of their cycle.
The day of ovulation differs from woman to woman and can even be different from month to month for an individual woman. For a woman with a 28-day cycle, the window of ovulation is day 11 through day 21 of your cycle. Ovulation could occur on any one day during this window.

Can You Ovulate During Your Period?

Menstruation or a period is the bleeding that occurs when the endometrium is shed 12 to 16 days after ovulation. With this definition of a period, you cannot ovulate while on your period.

Keep in mind that while you cannot technically ovulate while on a period because sperm can live in the body for 3-5 days after sex, pregnancy could occur from intercourse that takes place during a period.

Can You Ovulate Right After Your Period?

This is because ovulation generally occurs 12-16 days before your next period begins, and this would estimate you ovulating at days 6-10 of your cycle.

While conception cannot occur while you are on your period, pregnancy can occur from the intercourse you have during a period. This is because sperm can live in the body for up to five days, and if a woman ovulates soon after her period, then conception could take place from intercourse that occurred during her period. Keep in mind that you can get pregnant while experiencing mid-cycle or ovulatory bleeding. (See above for clarification regarding ovulatory bleeding and menstruation).

Can You Ovulate Without Detecting Cervical Fluid? 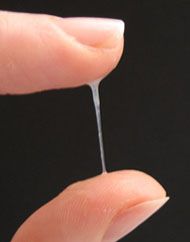 Ovulation can take place even if you do not notice the “stretchy egg-white” fluid that we assume accompanies ovulation. Every woman can experience her own type of cervical fluid. Ovulation is assumed to take place on the day a woman has the most amount of wet fluid. If a woman is not experiencing “egg white” cervical fluid, natural products are available to help increase cervical fluid production.

Women may have a high level of the LH if they have certain conditions such as polycystic ovaries, premature ovarian failure (POF), or for women over age 40 who are experiencing perimenopause. Also, women with Luteinized Unruptured Follicle Syndrome (LUFS) may have a surge in the LH hormone without ovulating. Any of these conditions could result in a false-positive result on an ovulation predictor test.

Can You Ovulate Without Having a Period?

Since a woman releases an egg 12-16 days before her expected period, it is possible for women to get pregnant without having periods. Women who are not menstruating due to a certain condition (i.e. low body weight, breastfeeding, perimenopause, etc…) risk the chance of getting pregnant because ovulation could start again at any point.
If you ovulate and do not start your period a couple of weeks later, you may want to take a pregnancy test.
For those who want to conceive, the lack of periods could make it more difficult to know the timing of ovulation if you are not charting your basal temperature and cervical fluid changes.  But if you are not having periods and wanting to prevent pregnancy, a form of contraception should be used since there is no way to know when ovulation will occur.

Can You Have a Period and Not Ovulate?

Having a period does not necessarily mean that ovulation has taken place. Some women may have what is called an anovulatory cycle, (meaning ovulation has not occurred). During an anovulatory cycle, women may experience some bleeding which may appear to be a period, although this is actually not a true period.
This bleeding is caused by either a buildup in the uterine lining that can no longer sustain itself or by a drop in estrogen. The main way to decipher if ovulation is, in fact, taking place is by tracking your basal body temperature.

What Resources are Available to Help Me Get Pregnant?

If you are trying to get pregnant and looking for resources to support your efforts, we invite you to check out the fertility product and resource guide provided by our corporate sponsor. Review resource guide here.