Supplements for Fertility and Prenatal Wellness: FH PRO for Women and Men

Can fertility supplements really Help? For couples who are trying to get pregnant, oxidative stress might not be something that’s on the top of their minds. Yet, oxidative stress caused by damaging free radicals may be one of the most important reasons why you’re 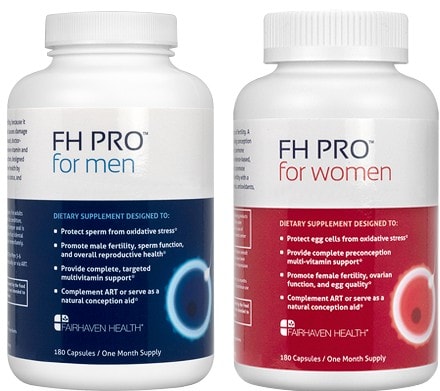 not pregnant. The good news? Two premium supplements known as FH PRO for Women and FH PRO for Men give your body the antioxidants it needs to protect the sperm and eggs from free radical damage that could lead to infertility.

Free Radicals are Your Worst Enemy

The ingredients in FH PRO for Women seek out and neutralize excess free radicals. Why is this important? Because in women, too many free radicals can damage eggs. Women only have a certain number of eggs to begin with. So, keeping more of them healthy and undamaged increases the chance of pregnancy. In addition, blame free radical damage for irregular cycles and reduced ovulation.

In men, free radical damage is the sperm’s worst enemy. The cell membranes of sperm contain high amounts of fat that are vulnerable to free radical attack. It can cause sperm counts to drop. And it weakens the sperm’s ability to swim to the egg. Sperm also has to be the right shape to do its egg-fertilizing job. Too many free radicals can change sperm’s shape. What’s more, sperm contain chromosomes. These chromosomes must merge with an egg’s chromosomes for a healthy new life to form. Free radicals can damage the DNA in these chromosomes. This can spell trouble for your unborn child’s health. Damaged DNA in chromosomes can lead to impaired brain development and IQ, among other serious problems.

Antioxidants neutralize free radicals, stopping them from doing any harm. FH PRO for Women and Men are loaded with antioxidants carefully chosen for their scientifically proven ability to support fertility. Both formulas contain Coenzyme Q10 (CoQ10). CoQ10 boosts the quality of women’s eggs.1 It’s linked to a higher fertilization rate and increased ovulation.1 In men, when CoQ10 was taken together with all the other ingredients in FH PRO for Men, there was a 33% rise in sperm count.2 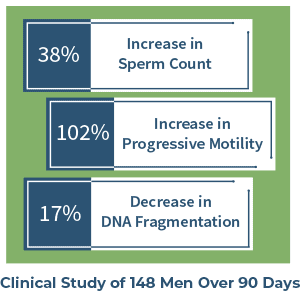 In addition to CoQ10, FH PRO for Men boasts an array of antioxidants. Vitamin E, N-acetyl L-cysteine, vitamin C, lycopene, zinc, grape seed extract, and selenium are some of the free radical fighters in the formula. The combination of ingredients in FH PRO for Men increased the sperm’s ability to swim toward the egg by 122%.2 And CoQ10 and the other ingredients protected the DNA in the sperm chromosomes, lowering DNA damage.2 FH PRO for Men is also packed with amino acids men need to make more healthy sperm. For example, L-carnitine increases sperm production and number, as well as sperm’s ability to swim toward the egg.3,4

Read more about the FH PRO for Men clinical studies.

FH PRO for Women helps improve the total number of eggs that are considered normal. It does this in part by nourishing a woman’s body with myo-inositol, folate, and melatonin.

Melatonin in and of itself is a powerful antioxidant. Levels drop with age.5 And if you’re exposing yourself to lights from cell phones, 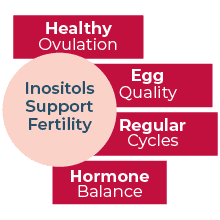 computers, iPads, and Kindles before bedtime, your levels might also drop to an unhealthy level. Since melatonin is produced in the dark, sleeping in a bedroom with exposure to outdoor or indoor lights can cause your body to hit the brakes on melatonin production. This spells trouble for fertility. With the amount of light pollution women experience every night and trying to get pregnant at an older age, it’s not surprising that melatonin supplementation may improve egg maturation during IVF treatments.5

Other fertility vitamins in the formula neutralize free radicals before the eggs are stored in the ovarian reserve. These include N-acetyl L-cysteine, grape seed extract, vitamin C, vitamin E, zinc, and selenium. N-acetyl L-cysteine can also support healthy ovulation and pregnancy rates.6

Knowing when you ovulate increases your chances of becoming pregnant. But predicting when you ovulate can be next to impossible if you have irregular periods. That’s why FH PRO for Women includes nourishing vitamins, minerals, and amino acids that reduce issues known to contribute to irregular cycles and ovulation. Studies have shown that CoQ10, N-acetyl L-cysteine, and myo-inositol support more regular ovulation.6-8 Vitamins C and E are also linked to a shorter time to pregnancy.9 Vitamin E was especially important in boosting fertility in women 35 years or older.9

A good fertility supplement must also support healthy insulin. Insulin is the hormone that controls blood sugar. Imbalanced insulin levels create problems that can lead to infertility. For example, excess insulin causes a rise in testosterone in women. This can put the brakes on ovulation. That’s why FH PRO for Women contains D-chiro-inositol, a nutrient that supports healthy insulin secretion.10 D-chiro-inositol also leads to optimal levels of luteinizing hormone and LH/follicle stimulating hormone, which are important for conceiving a baby.10 Like D-chiro-inositol, myo-inositol is included in FH PRO for Women because it supports healthy insulin.8 It also stimulates ovulation.8 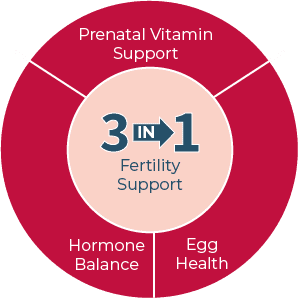 FH PRO for Men and Women help remove the most common fertility roadblocks. The ingredients are clinically proven to improve sperm health, enhance ovarian health and egg quality, make your cycles and ovulation more regular, and balance your insulin levels. The formulas are doctor developed.

You can purchase FH PRO for Wome and FH PRO for Men from our corporate sponsor, Fairhaven Health.
References: